Should you be eating tilapia? 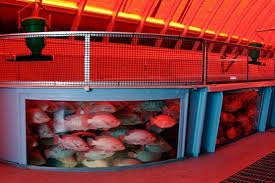 Tilapia has become the ubiquitous fish in America today. It's cheap, not "fishy" tasting, boneless and skinless, and is hard to mess up by overcooking, which is a problem with many other fish varieties.
So what's not to like, right?
Actually, plenty.
The tilapia we're eating is almost entirely a farmed fish, meaning you cannot find wild tilapia in any grocery store or on any restaurant menu. And the farming is usually done on an industrial scale, with thousands of fish being harvested every day. Their feed is not natural -- in the wild, tilapia would eat algae and lake plants, but the farms fatten up the fish on corn and soy pellets. The amount of healthful fish oils in these creatures is almost negligible, thus negating the main reason why fish is so good for us.
It gets worse.
The tilapia farms are mostly in Central and South America, and they are environmental nightmares for the lands that host them. It turns out that tilapia is an invasive species that, when it gets into the wild, crowds out other native marine life.
This is just a summary of the many problems associated with this fish. We stopped buying it months ago, and while that decision has cut down on the servings of fish we eat each week, I now believe we were not getting any real benefits from it.
As with many considerations of the production of cheap, plentiful foods, the practice of tilapia farming has its defenders. It does, after all, provide an inexpensive source of protein that can help feed a hungry world. And there's a movement afoot to regulate and standardize the conditions at industrial fish farms.

Click here for a more in-depth look at the pros and cons of eating tilapia.
Posted by Pama Mitchell at 5:41 PM